The setting sun baths the refugee settlement in the West Timorese village Sukabitetek with a golden light. We know that it will get dark soon, but the low watt light bulb inside is an unreliable friend, so no one is in a hurry to enter.

Nevertheless, this evening in August, optimism and excitement rule. About 20 men have gathered to address important issues. The women are, as usual, in the background, commenting on the discussion amongst each other. In Timor, the men make the decisions.


The women stay up to cook all night in preparation for the ceremony.


It has been 5 years since the 13 families living in the settlement escaped from violence in East Timor. Most of the East Timorese refugees have repatriated, but according to the government 15,699 remain in West Timor, and are now considered Indonesian citizens. However, formal Indonesian citizenship has not ended their life in hardship. Many of the former refugees live in camplike conditions struggling to make ends meet on land, which is not their own.

Rights to ownership and use of land are the most complicated challenge to durable solutions. Land and water are scarce in the poverty ridden West Timor, and the local population is often not better off than the former refugees.

The struggle over limited resources creates potential for conflicts. Some refugees have experienced being expelled from their place of refuge, but where to go? Returning to East Timor is a distant dream for most. Some fear retaliations if they return, others worry that they will not find work back home. Many worked for the Indonesian administration in East Timor before independence. On the Indonesian side of the border, they are still entitled to their pensions and salaries.

The East Timorese in Sukabitetek have been lucky. When they arrived 5 years ago, the local population welcomed them. The oldest man in the village, Herman Besin, is a man of a simple lifestyle. His house is modest, and he always dresses in his traditional sarong of woven cloth (tais). His large extended family has never had more than they need. Nevertheless, they generously gave the refugees land to set up their temporary homes and gardens.


After living as neighbors for the last years, Mr. Besin overwhelmed everybody with his offer to formally transfer land rights to the refugees. "I see the refugees as a part of my own family now," he says to explain his good deeds. "They have been good to us and very helpful the time they have been here."

The NGO Jesuit Refugee Service (JRS) Indonesia and a legal consultant assisted Mr. Besin and the refugee coordinator Mr. Cornelis da Costa Marcal, to set up legal contracts between the old and new families in Sukabitetek. The contract gives the new families the right to occupy the land for 8 years. After that time, the contract can be renewed.

JRS West Timor coordinator Doni Akur explains that contract for a land, which is not officially sold, needs to have a time limit. At the same time, the Besin family strongly indicates that the renewal of the contract in the future will be a matter of formality.

Nevertheless, a clear and formal legal agreement between the parties is important to prevent future misunderstandings and conflicts. As land disputes are common in West Timor, the process begins with determining that Herman Besin is the true and sole owner of the land in question.

The legal agreement will be signed in a ceremony in the presence of government officials as witnesses. Mr. Besin and Mr. Cornelis also hope this will bring an opportunity to address the government and ask them for assistance for improved water, sanitation and housing. The government has already supported relocation projects in other parts of West Timor. "I think that when the government sees that a poor man like me is able to help the refugees, they will realize that they should also do something", Mr. Besin says with hope.

This evening in August a few days remain before the ceremony, and old and new villagers have gathered to discuss how to organize the event. The discussion goes back and forth as ideas pop up.

Finally the head of village, Mr. Siprianus Fahik Blau, asks an essential question. "How can we ensure that good relations remain between the Besin family and the refugees?" He knows that scarce resources may cause future conflicts even between good friends. "We have to receive the new families in accordance to our cultural tradition," he says, "only if we do that, we will prevent politics from causing tension among us."

The villagers get excited. "That means that we should make a Fetsawa Umamane ceremony!" exclaims one of the elder men from Sukabitetek. He explains that the Fetsawa Umamane is a ceremony usually performed at weddings.

Traditionally the bride's family, the Umamane, has to give woven tais and a meal of pork to the husband's family, the Fetsawa, who returns the gesture with gold and silver. Today, the gifts are negotiated, and because silver and gold in most cases are unavailable, they have ways to calculate it into modern values - the Indonesian Rupiah.

The group gets busy defining the elements of the ceremony, comparing the myths and traditions of the east and the west of the Timor island. They are excited to find similarities in each other's myths of origin, which proves their relations as one people. 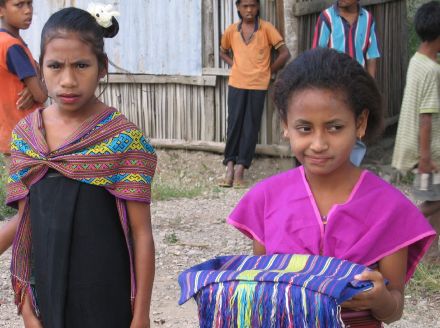 "We are all the descendants of the same forefathers," Mr. Siprianus says. "Before the Dutch and Portuguese divided us, we all came from the same kingdom. A Fetsawa Umamane ceremony will strengthen this traditional tie." "The ceremony will make us always remember the Besins as our own family if we return to East Timor one day, and prevent conflicts while we are here," Mr. Cornelis adds.

The givers of land represent the bride's family in the ceremony. Mr. Besin and his family, announce that they are able to offer 5 woven tais to the refugees. The refugees are the grooms, and they leave the group to discuss in private to avoid loss of face, whether they are able to match 5 wowen tais with the appropriate 550,000 Rupiah when translated into modern money.

They look slightly distressed, knowing that it is a considerable amount of money when you have little. JRS offers to cover half of the sum, on the condition that the refugees will be able to contribute their part. If the parties did not have to make any sacrifices for the ceremony, it would not be valied. JRS also agrees to buy an ox that can be sacrificed and consumed by the guests of the ceremony. The refugees will provide enough rice, vegetables and spices.

When the agreement between "bride" and "groom" has been made, the deal is closed with coffee and banana biscuits, served by the women. The next day the Besin family meets with the refugees for the first part of the ceremony, where a pig is sacrificed and a meal is shared. This is the first step for the refugees to become full members of the local community.

The night before the ceremony, general rehearsals of the rituals are held. The welcoming speech in the local Tetun language has to be flawless, otherwise it means bad luck. Some of the women bring out their drums and practice a dance. The daughter of Mr. Cornelis is asked to cite a poem about the refugees and their experiences over the last years.

The ones that are not involved in the ceremony, take care of the food in the back. Cooking an ox will take the whole night. The youth sneak away to dance until early morning. It is just like preparations for a real wedding.

Unfortunately, the first trial of holding the ceremony in Sukabitetek was unsuccessful. Before it started, a hand written note was given to a local government official with the claim that the land in question was not entirely owned by the Besin family.

The traditional ceremony hence stumbled in legal matters. The entire program had to be postponed, very much to the disappointment of everybody, especially those that had spent the whole night preparing the food.

JRS called the involved parties together to again discuss the ownership of the land, and it took only one meeting to establish that the land in fact is the possession of Herman Besin, and that the false claim probably is a product of jealousy.

The following week the ceremony was finally performed in the presence of the government. The legal paper was signed and Mr. Besin's family handed over 5 beautiful tais, and received the agreed upon amount of money from the refugees. Legally the refugees gained rights to use the land, and traditionally the old and new families of the community have become one.

Practically, the simulated wedding ceremony creates direct family relations between the former refugees and the local community. With this arrangement, local custom (adat) creates a framework where future conflicts can be handled and avoided.

In the local community, the binding of local tradition is stronger than formal legal documents. That makes the Fetsawa Umamane ceremony, in this case, an important supplement to the legal process. The combination of a formal legal and traditional approach will hopefully lay a solid foundation for good durable solutions for old and new families in Sukabitetek.

JRS Indonesia has experienced that traditional ways to solve issues of displacement can be very fruitful, not only in West Timor but also in other parts of Indonesia.

Finding the appropriate traditional approach becomes a process in itself, which ties the refugees and local communities together. It creates an arena where people sit down to discuss values that are essential in their culture.

In the case of Sukabitetek, the East Timorese and West Timorese rediscovered their similarities. In other places differences may be discussed, and the communities may learn more about each other's cultural background.

Furthermore, the discussion about local traditions engages people. "The villagers are the experts on local traditions," the head of village in Sukabitetek said during the discussion. "Not even doctors from the best universities will know more than what is among the local resources on culture and tradition."

With this in mind, paying respect to local customs ensures local ownership to the process and includes a broad scope of the community. Women and children who are generally marginalized in political processes in Timor, played an equal role to the men in the preparations and during the ceremony.

All challenges for the former East Timorese refugees in West Timor have not been overcome, but it is possible that with the right traditional approach, combined with appropriate development programs as incentives, the government and humanitarian agencies may find more people like Herman Besin, who has a big heart and land to give.


Ingvild Solvang is a social anthropologist and the Advocacy Manager of JRS Indonesia.

Skin by www.keoshi.com, modified by Lorenz